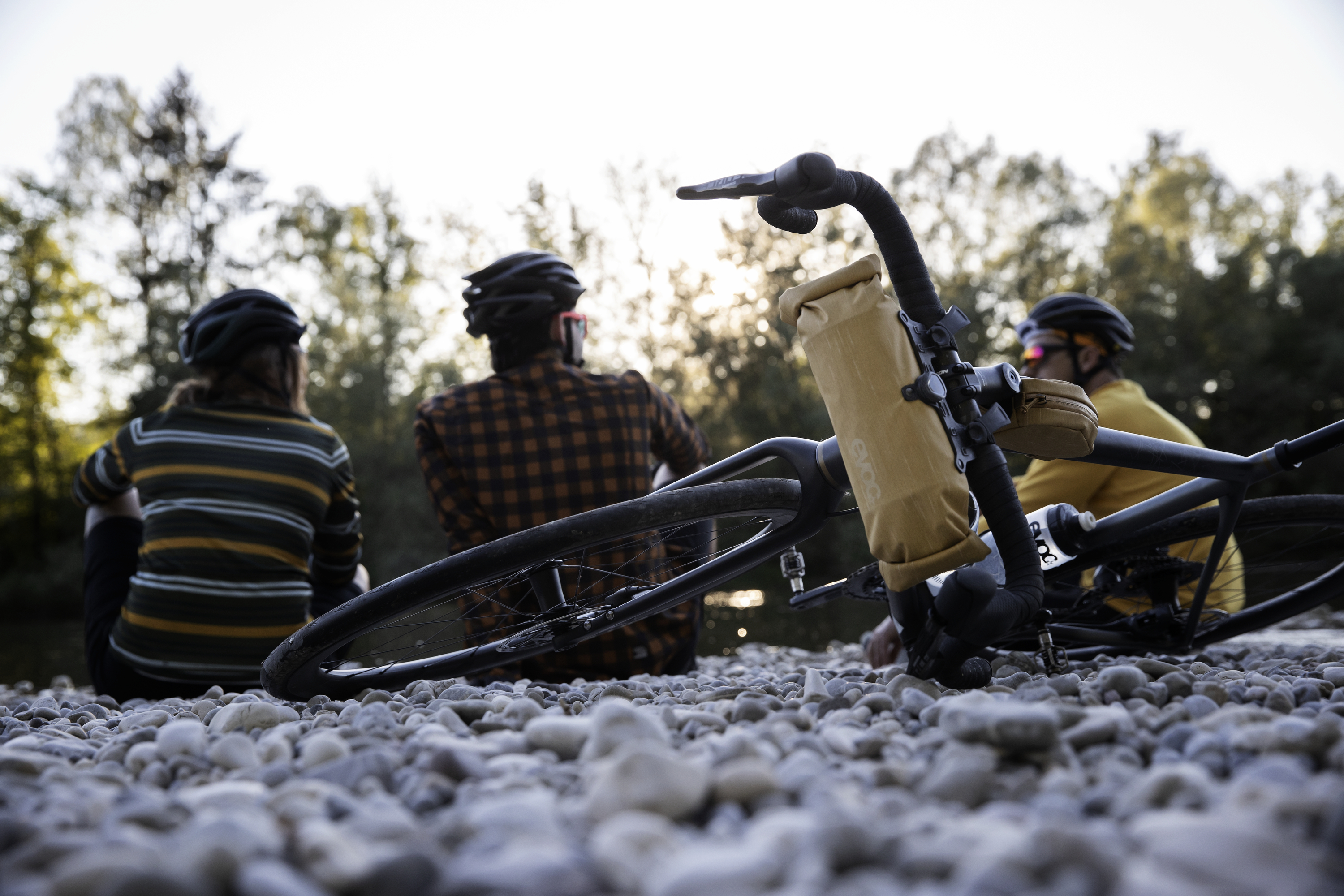 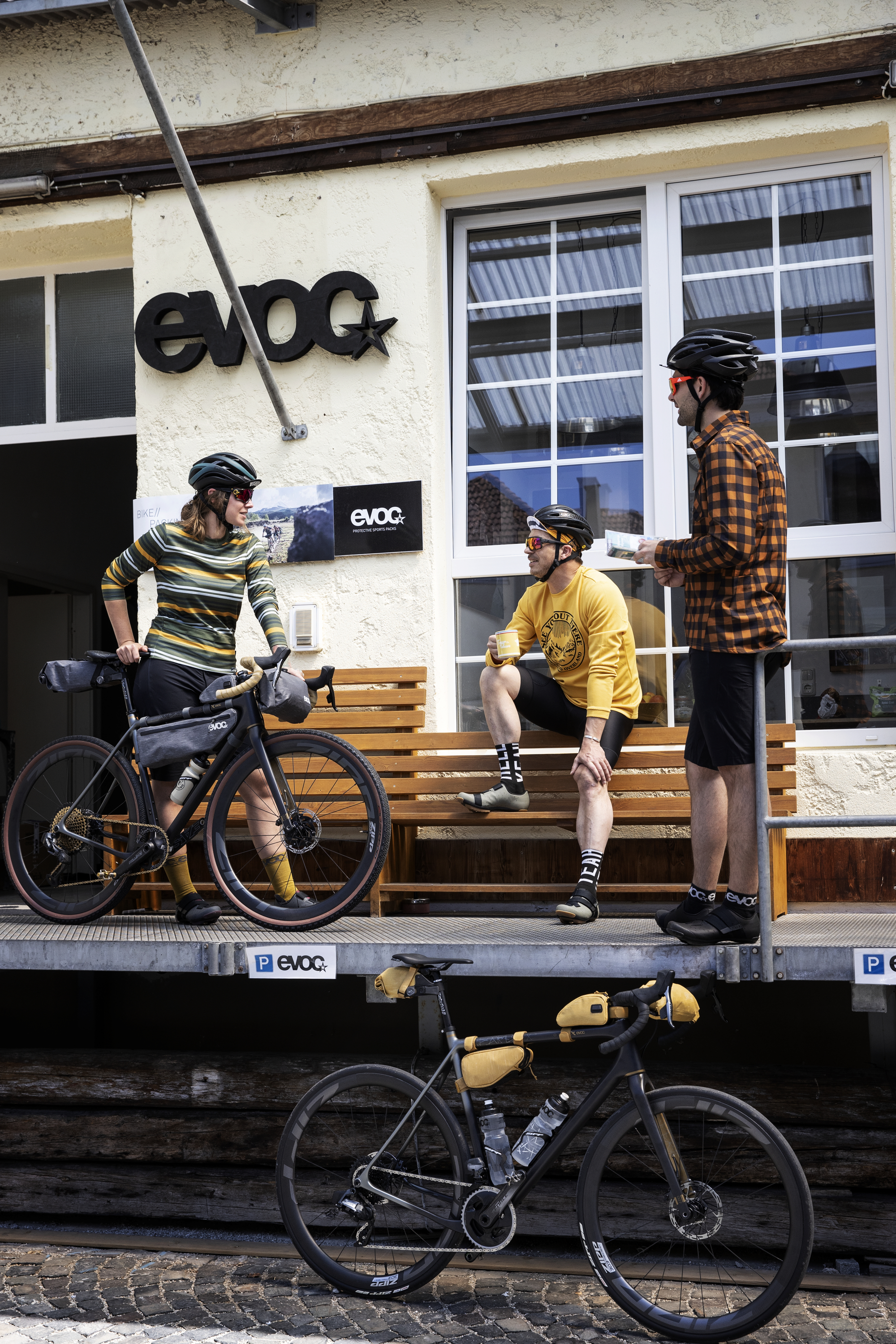 The air is crisp and it still feels a little nippy as we meet at the EVOC headquarters in Munich on this very early summer morning. Today is one of the “another day at the office“ days that we relish so much, because today we’re off on a gravel tour.

In the previous weeks and months we have been intensively racking our brains over the topics of “bikepacking“ and “gravel“ and now it’s finally time to put our new “on-frame-bags“, i.e. bags that are mounted directly on the bike, to the test in the wild. For this purpose, we chose one of our favorite home trails right at our doorstep - along the beautiful Isar river.

However, there is one issue we just hadn’t foreseen.

There is neither a mutual agreement on what the term “bikepacking“ actually entails nor have we found a consensus on what “gravel“ really means. The only thing we can see eye to eye on is the fact that it seems sensible to have extra storage capacity when you want to use a road bike outside of smooth tarmac roads. 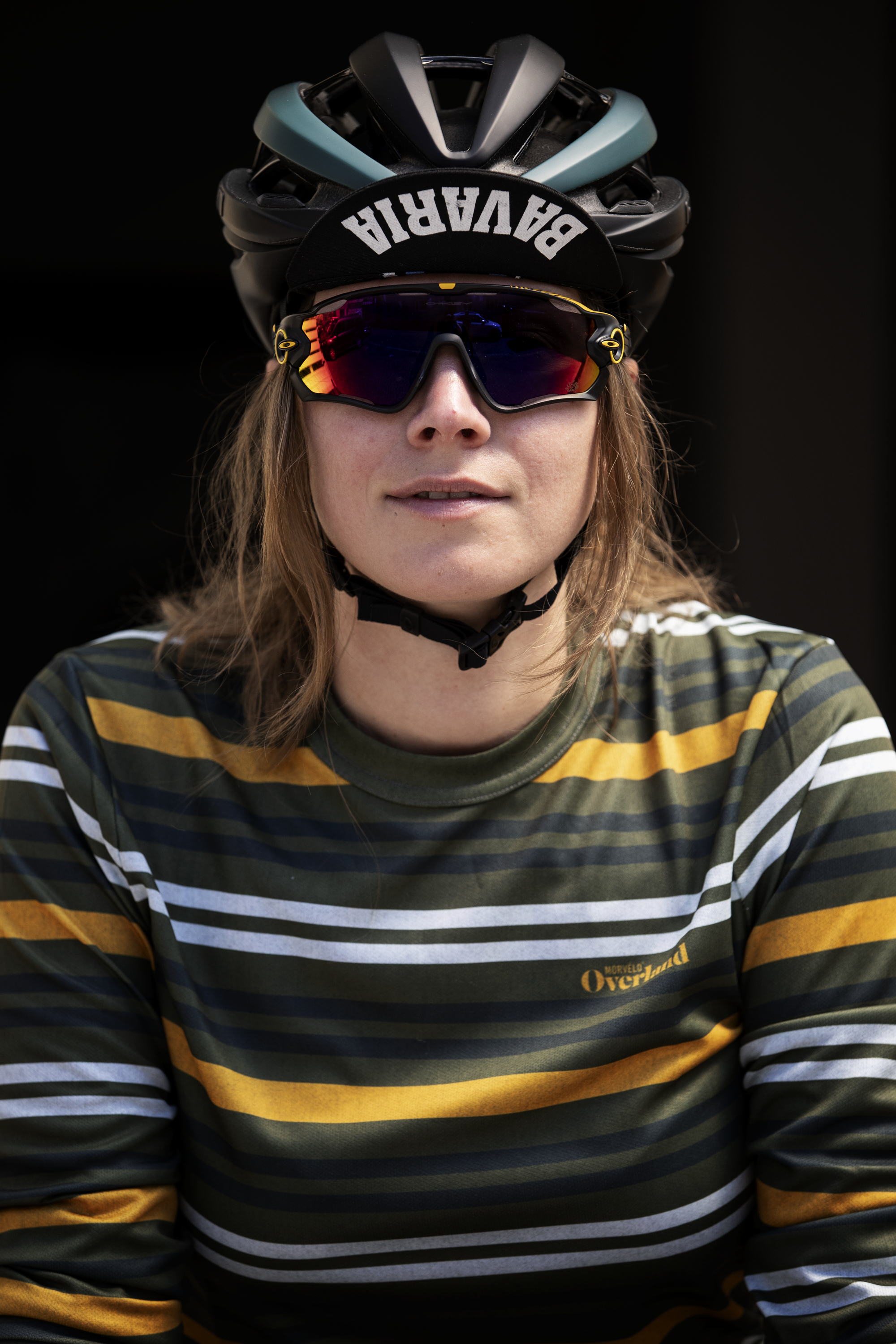 Annabelle, who is responsible for product management at EVOC, primarily wants to discover nature. She is a fly fisher and today she plans to explore her favorite fishing spot by bike while using the most scenic routes possible. Aside from a repair kit and a few snacks, she has to bring her fishing gear which takes up quite some space.

Kevin who is responsible for EVOC’s business development, on the other hand, has a completely different set of requirements. For him the gavel bike is a piece of sports equipment that has made trails more exciting again. It’s the turns, jumps and technical passages that the former trials rider wants to conquer while combining the liveliness of a road bike with a whole new dimension of all-terrain capability. Today he plans to venture a little further south than usual, so he just needs a few provisions and a change of clothes on board. This means his demand for storage space is relatively straightforward. For him the challenge regarding the packing equipment is more centered on the bags’ firm fixture so they remain reliably in position whatever gnarly moves he has in store. 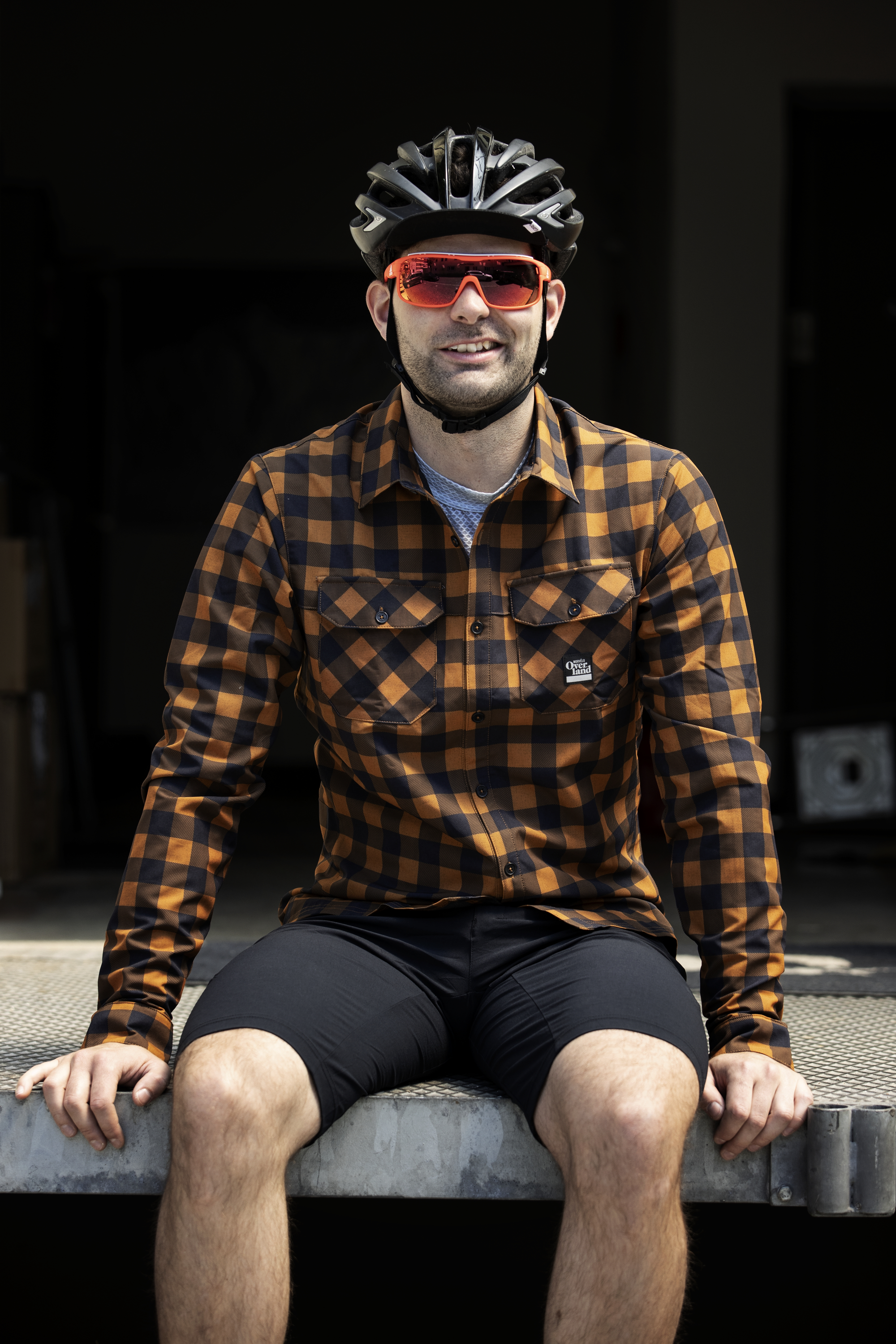 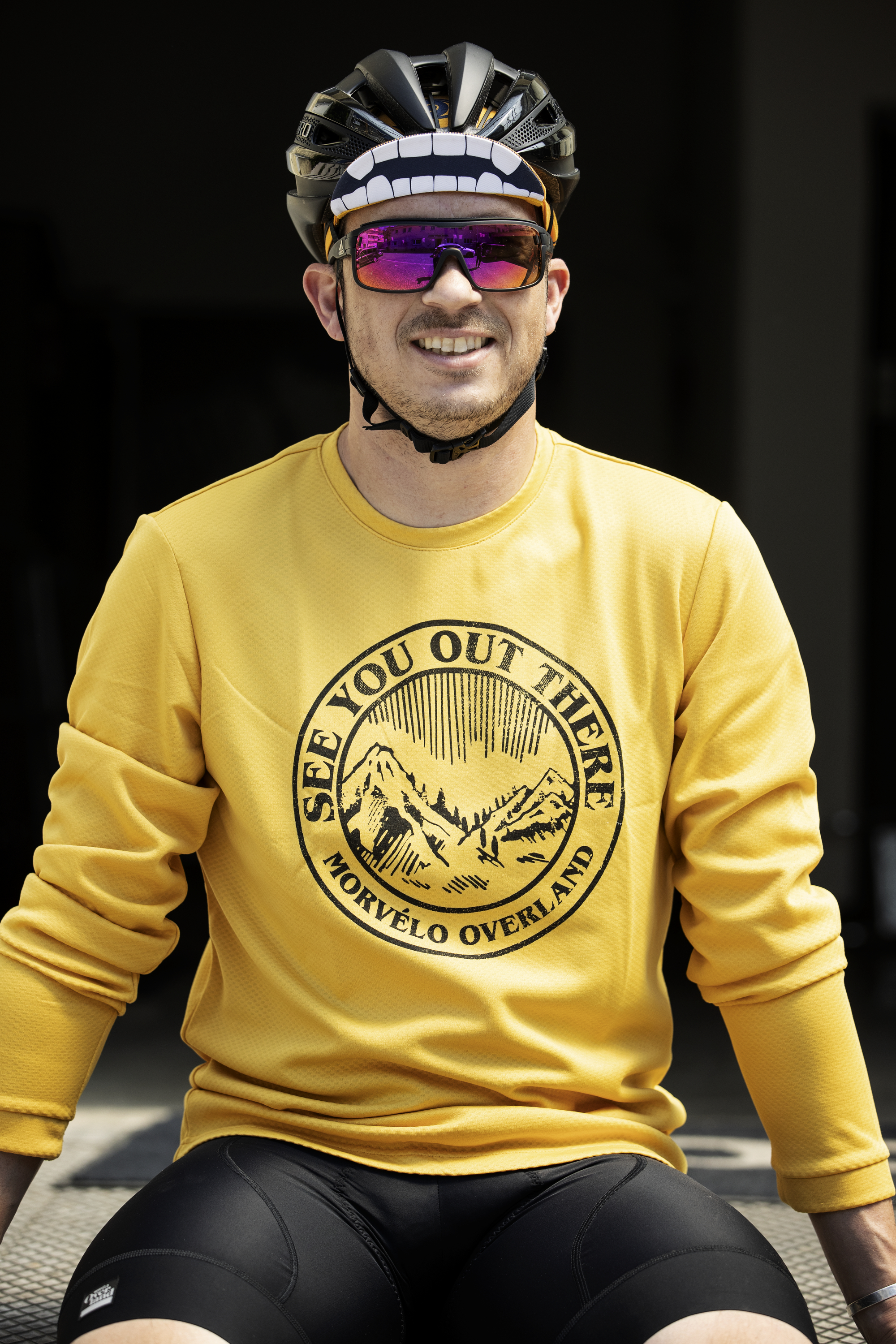 Jan, EVOC’s marketing manager, has a rather more puristic road bike approach. What makes gravel biking most appealing to him is the fact that this new cycling discipline has enabled him to go on long rides with varying surfaces - and to do it at speed. His goal is to get to the source of the Isar which is about 140 km and so he chose his setup accordingly: he is the only one riding a double crankset and was focussed on reducing additional weight to a minimum by only bringing the most essential equipment on this long day, so he chose the most compact bags. 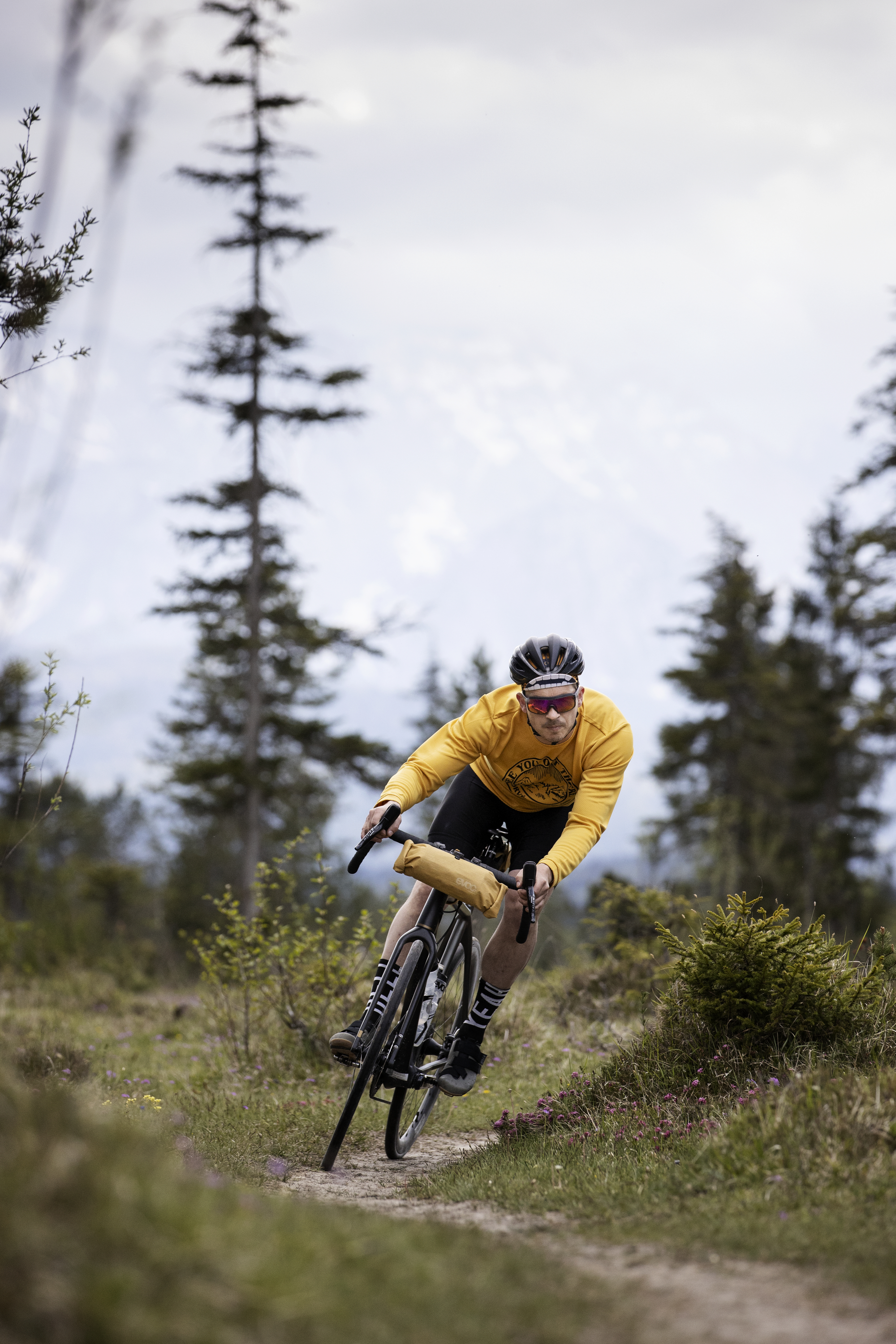 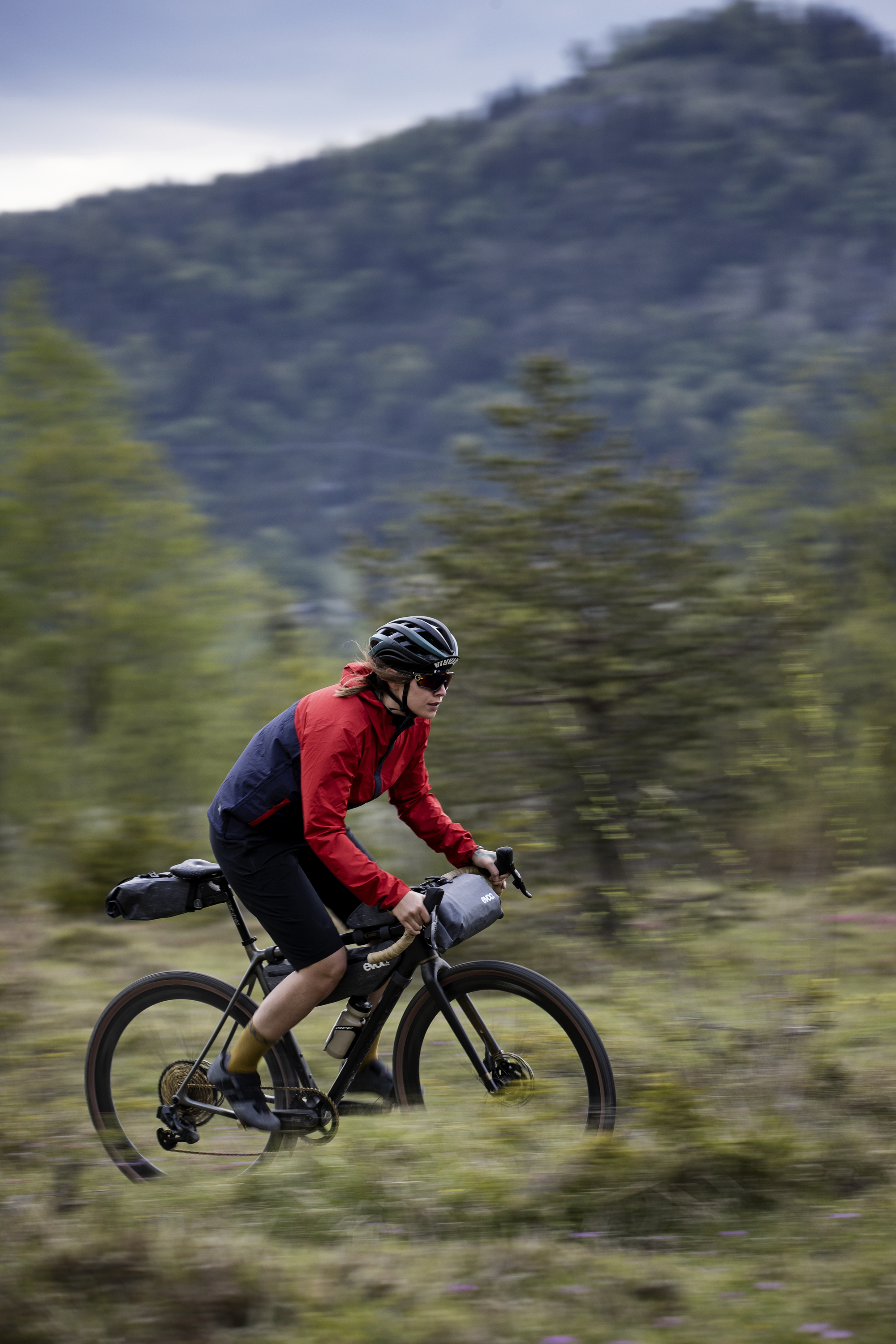 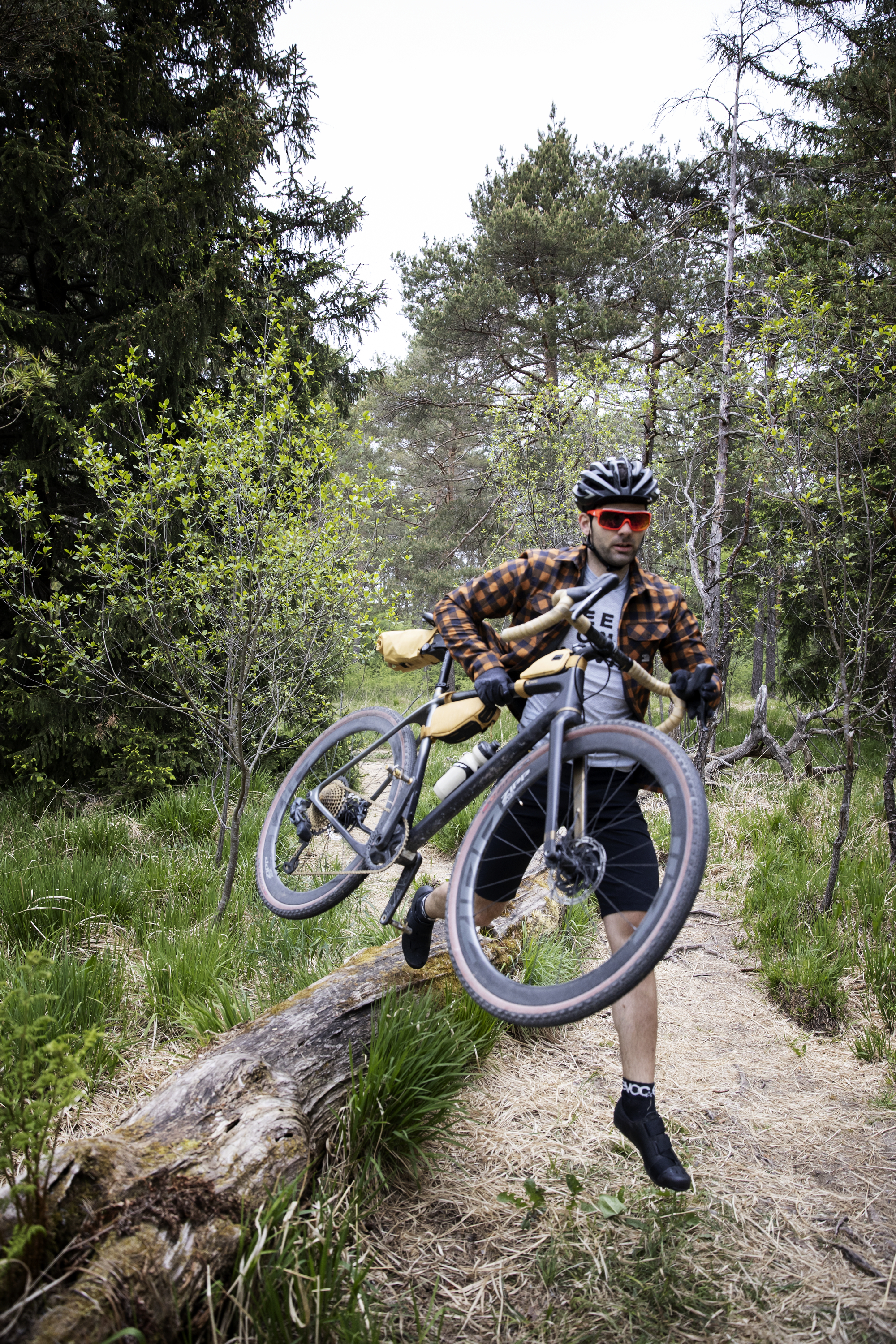 So, it’s a good thing our bike packing range is designed for versatility! And what’s even better is the fact that we have first-class gravel biking trails right at our doorstep here at the EVOC office, so that everyone will get their money’s worth today.

After only a few hundred meters from the office, where the cycle path leads out of the city, along the high bank of the Isar, everything quickly starts turning green. As you reach the zoo, you already get to choose from a multitude of trails and paths. Depending on your personal preferences, you can either stay on one of the broad cycle paths on the left or the right bank or take one of the numerous trails that weave through the beautiful floodplain forrest alongside the river. Until you reach Grünwald, you will be accompanied by many other nature loving tourists, due to the proximity to the city. Most will be looking for some of the marvelous sections of bank where it’s alluring to rest or even spend the day, especially in summer. Once you pass Grünwald, it becomes considerably more tranquil and also wilder which makes navigating along the banks more challenging. While the hilly gravel path on the west bank continues by the river for the next 10 kilometers until you reach Schäftlarn monastery, the eastern bank has several routes in store that are distributed slightly higher up the bank and require some navigational skill.Here you will find very versatile and technical sections up- as well as downhill and for the next kilometers you can accumulate a surprising amount of altitude difference.

South of the monastery there lies an especially picturesque bit of the floodplain called Pupplinger Au which is a nature reserve, and rightly so. Here, you can either take the tarmac road on the east bank or the befitting gravel path on the Isar channel dam to the weir at Icking where the two routes reconnect at Aumühle. Just a few kilometers along, you will reach the Aujäger, a popular restaurant and beer garden which is an especially attractive destination for people looking for a half-day gravel trip starting in Munich.

Once again you’ll have to decide how to proceed. In the west, there are branched gravel trails and on the opposite side there is a smooth tarmac road a little further away from the Isar tempting to pick up the speed and make some headway. The many little paths and trails from here to Bad Tölz can only be recommended to adventurous riders who are willing to accept long foot marches. The floodplains are very expansive here and there are innumerable branched waterways while the bank gets hillier and steeper, so that many paths simply end or turn into unrideable hiking trails. 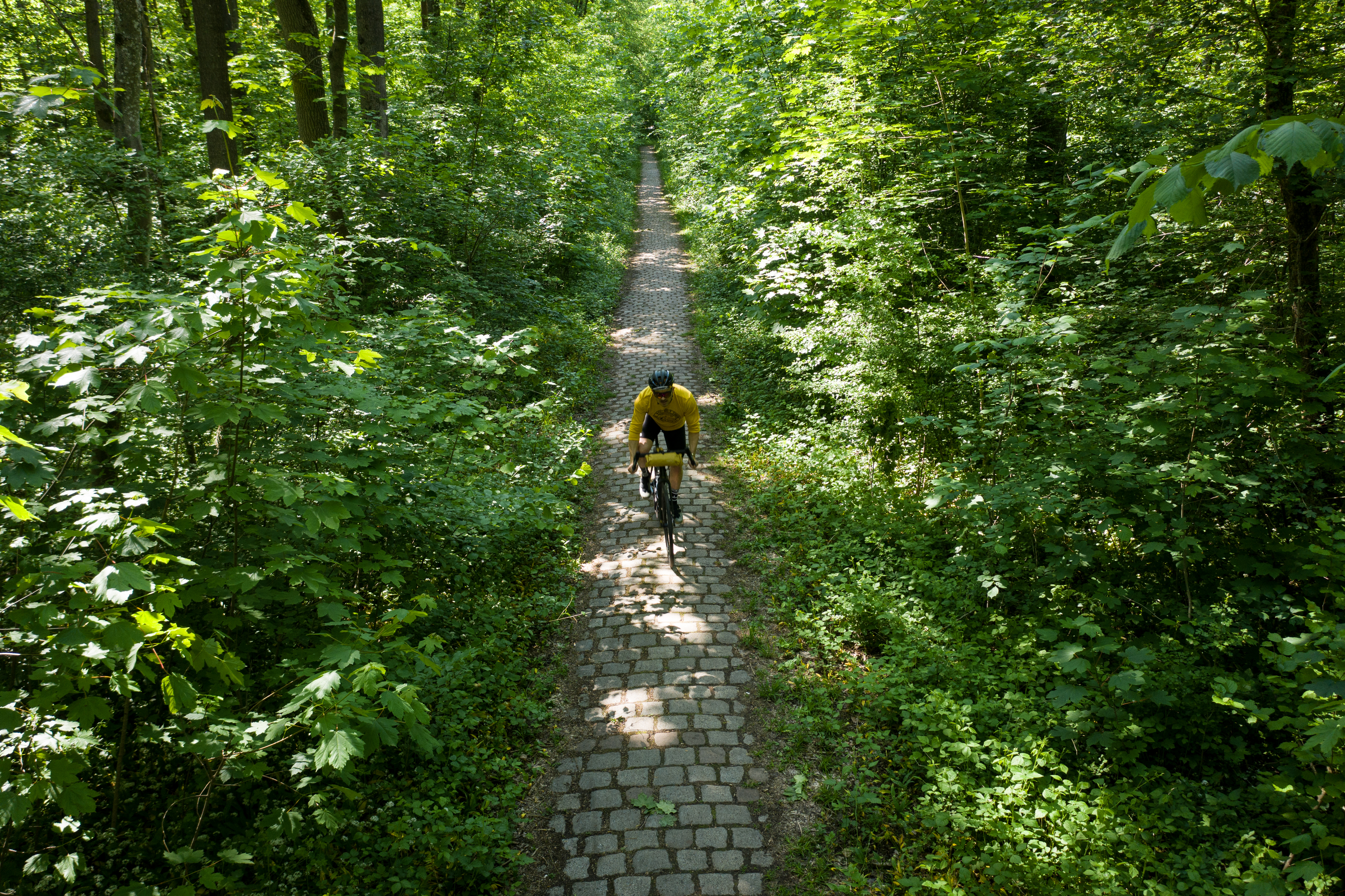 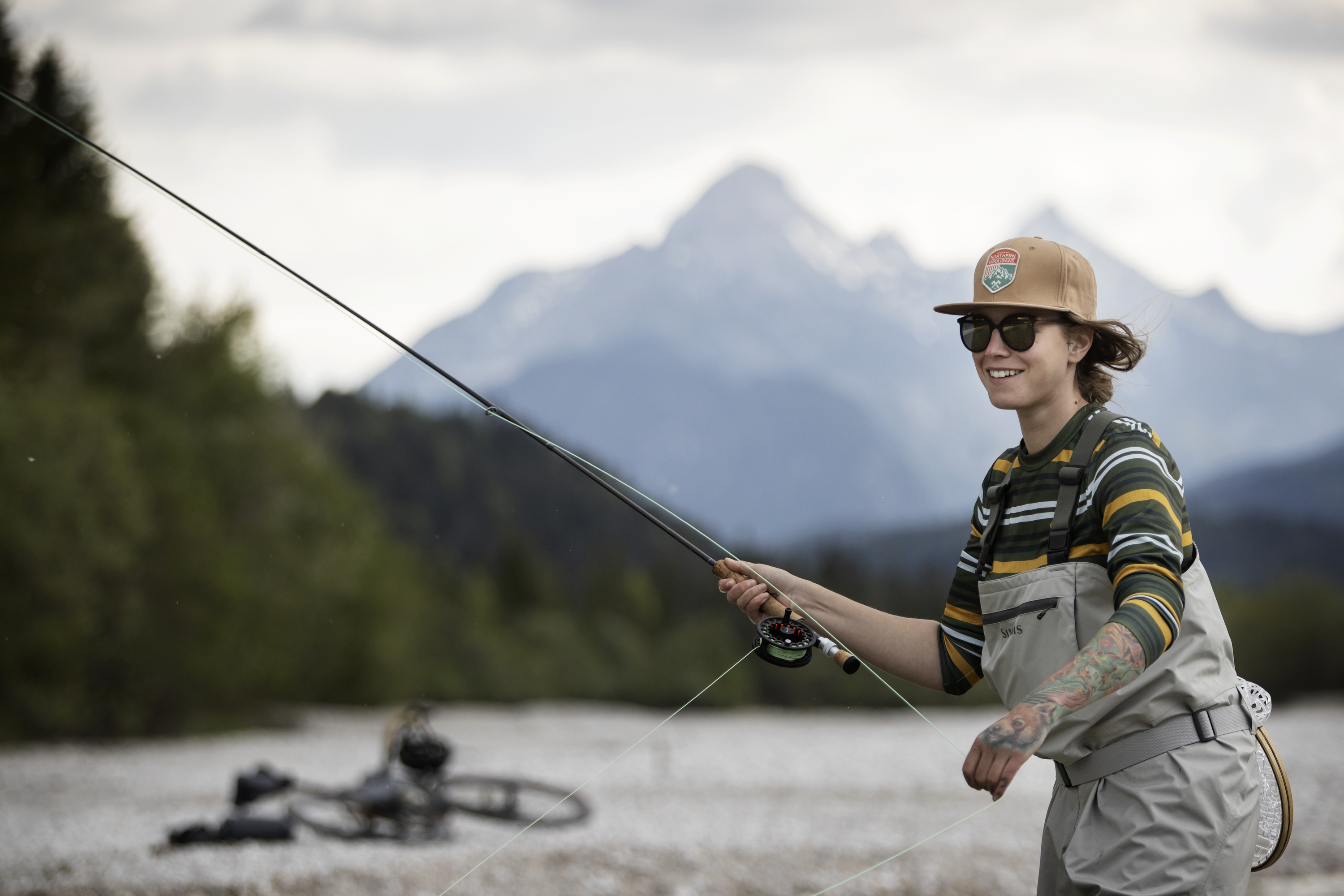 Bad Tölz awaits you with a wide and calmly flowing Isar. You cross the town on a cycle path directly along the river while enjoying a view of the promenade. Then you catch early glimpses of the peaks of the Alpine foothills just as you leave the city limits and they fill you with the first Alpine flair of this tour. Soon you get to Lenggries which constitutes the half-way mark of the route to the source of the Isar. The climbs gradually begin to increase and the mountains draw closer from both sides. You continue on a smooth cycle path along the main road before the route branches off to the left where it leads you up an increasingly steep ascent though the forrest towards a tunnel. There is a blue shimmer at the end of the tunnel and you are spat directly into the Alpine postcard scenery of the Sylvensteinspeicher reservoir. It is virtually impossible not to make at least a little stop here to take in the views. It is also recommended to take in a few deep breaths, too, because the next few kilometers you will be accompanied by the never-ending stream of alpine tourists on the main road until you turn onto the toll road at Vorderriß. At its upper reaches, the Isar has a hue of Caribbean blue and again you are met with the agony of choice: continue on the tarmac of the toll road to Wallgau or cross the bridge to absolute gravel-riding paradise?

The price for this is a few meters of altitude difference more and a couple of steep ramps that take any drivetrain and most riders to their limit. The reward is the experience of an exceptional river landscape and probably the most beautiful section of the tour. And it remains just as idyllic behind Wallgau, through Krün, Mittenwald and Scharnitz. The river runs in numerous branches between gravel banks and if you didn’t know any better, you would think you were in Canada. The further course of the route is well marked with signs from the Tyrolean tourism association as “Isar Radweg“ and it leads through a model railway scenery with river and mountain landscapes of incredibly striking beauty. You almost begin to regret the tour is coming to its end, when, right after Scharnitz, you are greeted with a last gem of a section, because now you have reached the mountains for real. After a short and steep climb, you enter the Hinterautal valley and continue over a gently rolling gravel path alongside the banks of the Isar which is more of a mountain stream here and no longer the river that runs through our city. The last couple of meters to the sources - the well of the river is a headwater region and two sources are named - can no longer be undertaken on bike. But of course you gladly walk the last ten minutes to well 1 which actually looks like you thought a river source would look like. And now, what could be better than to fill your water bottle with water from your home river that you have accompanied for so long? 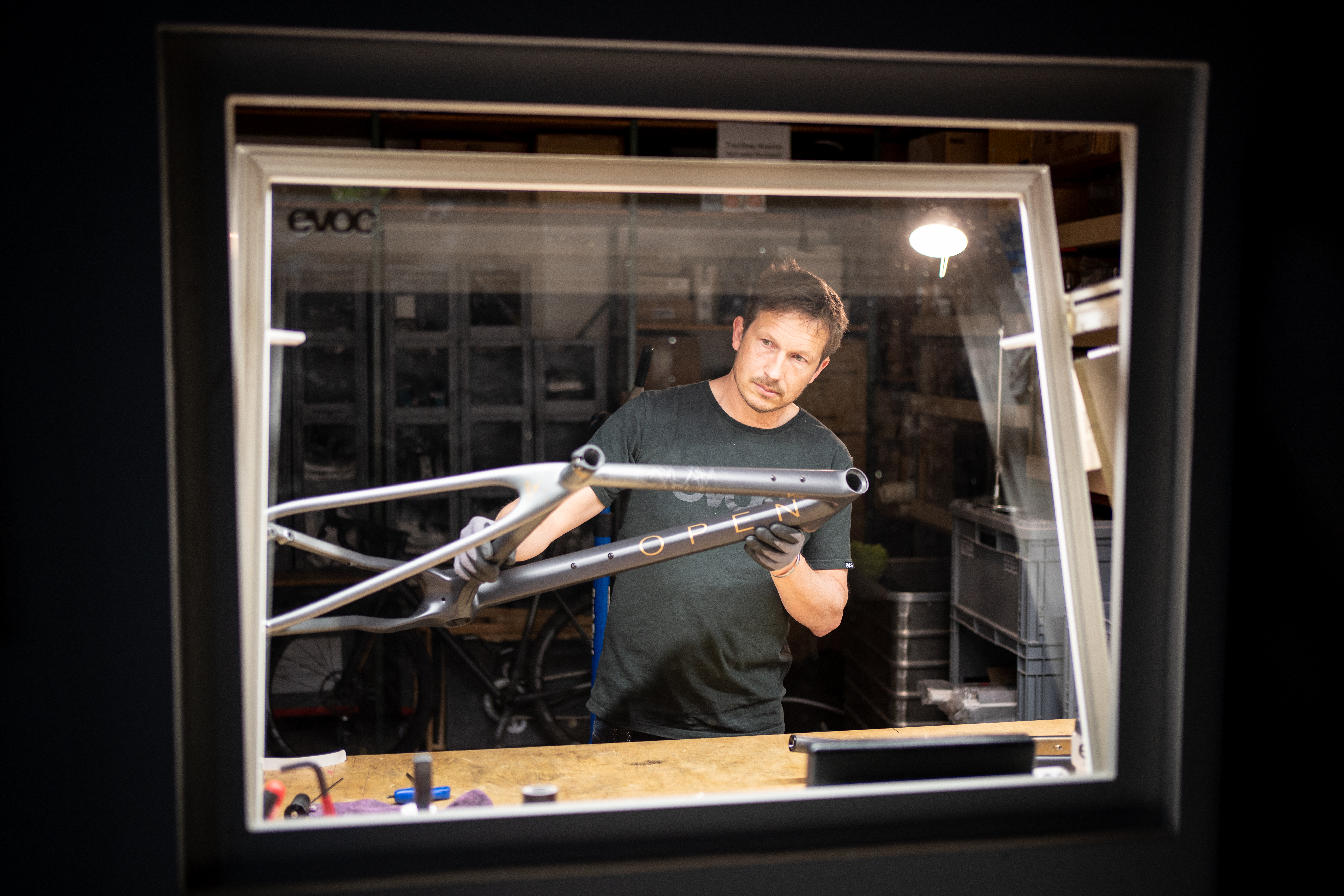 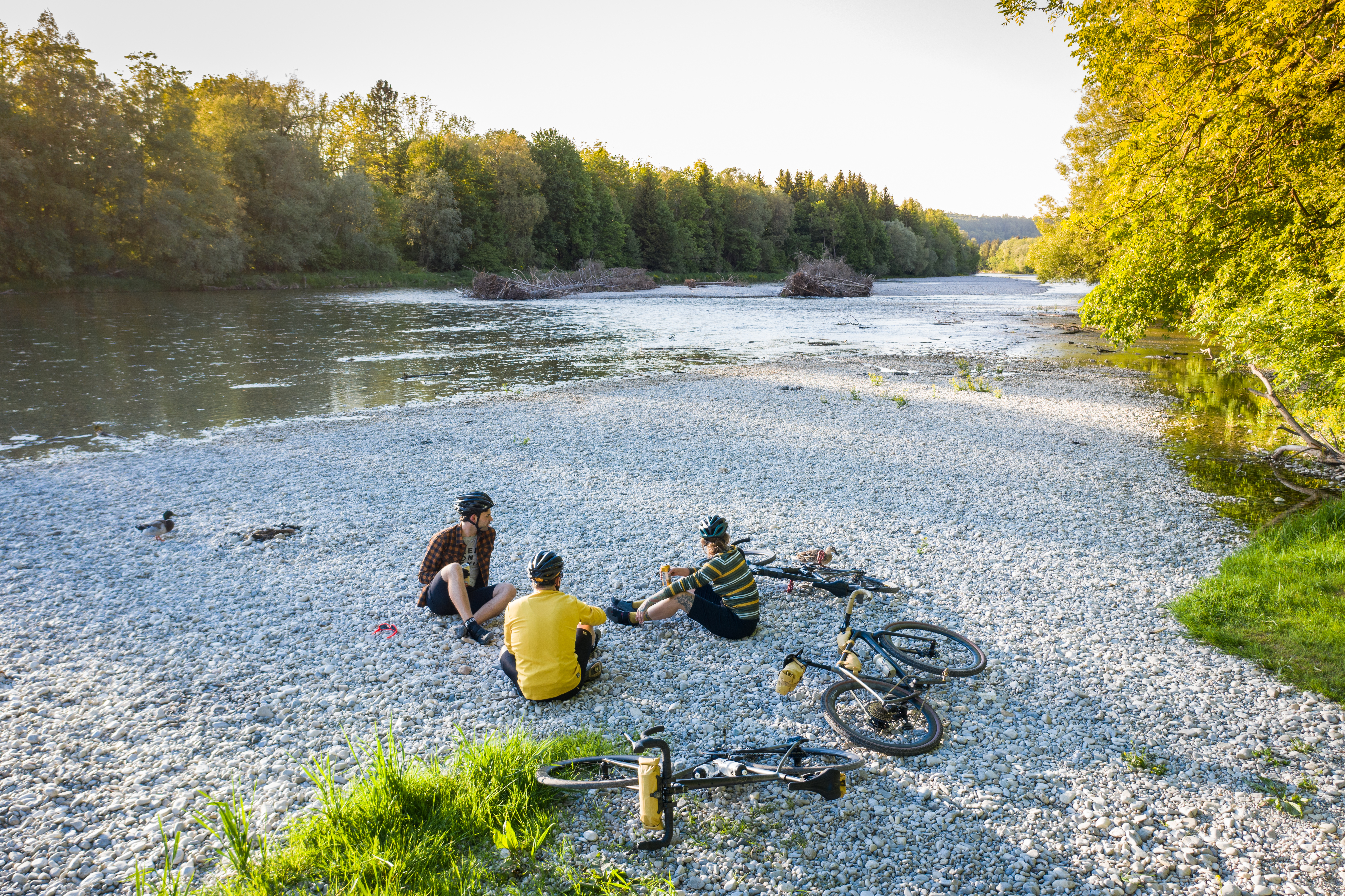 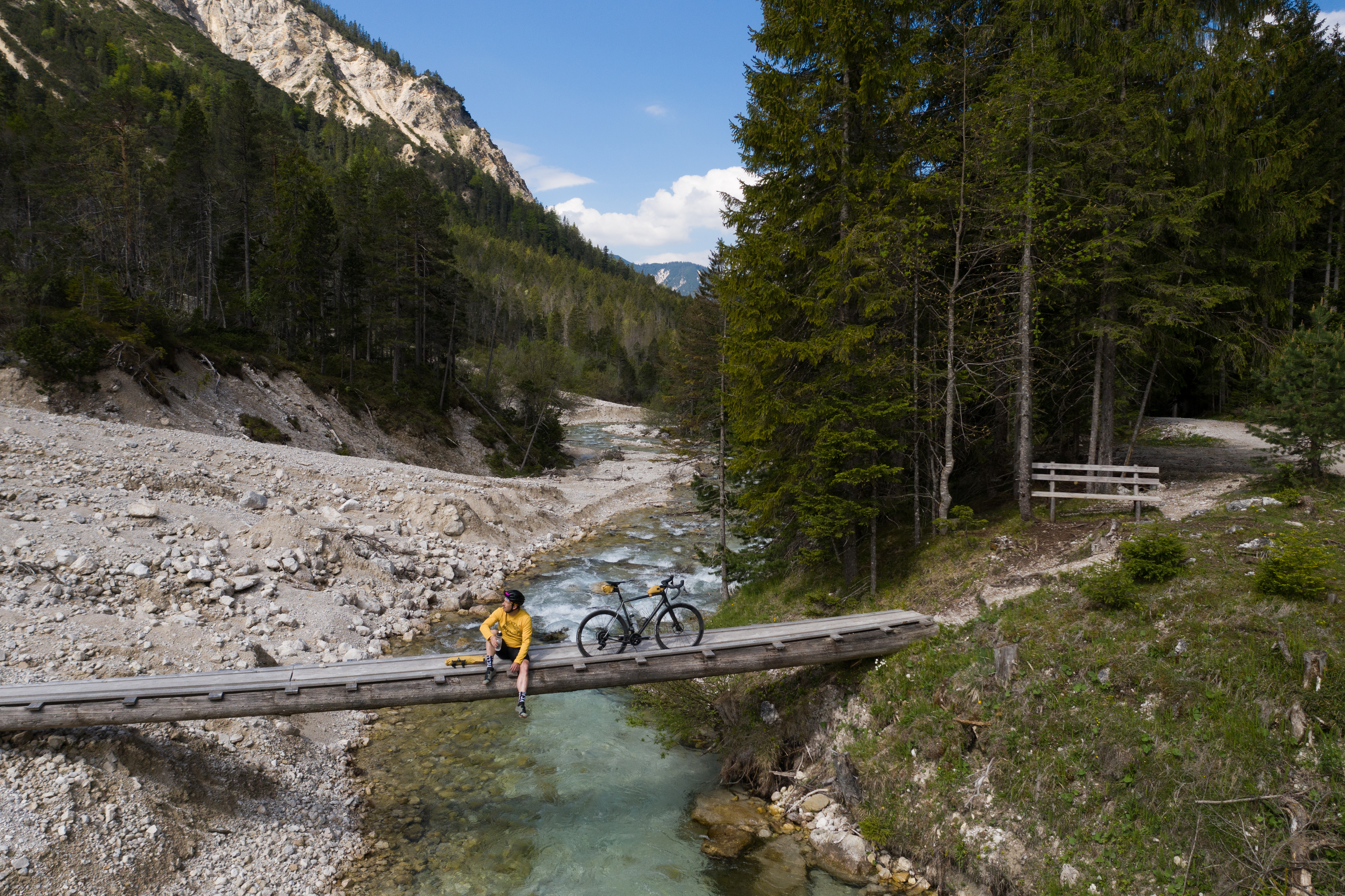 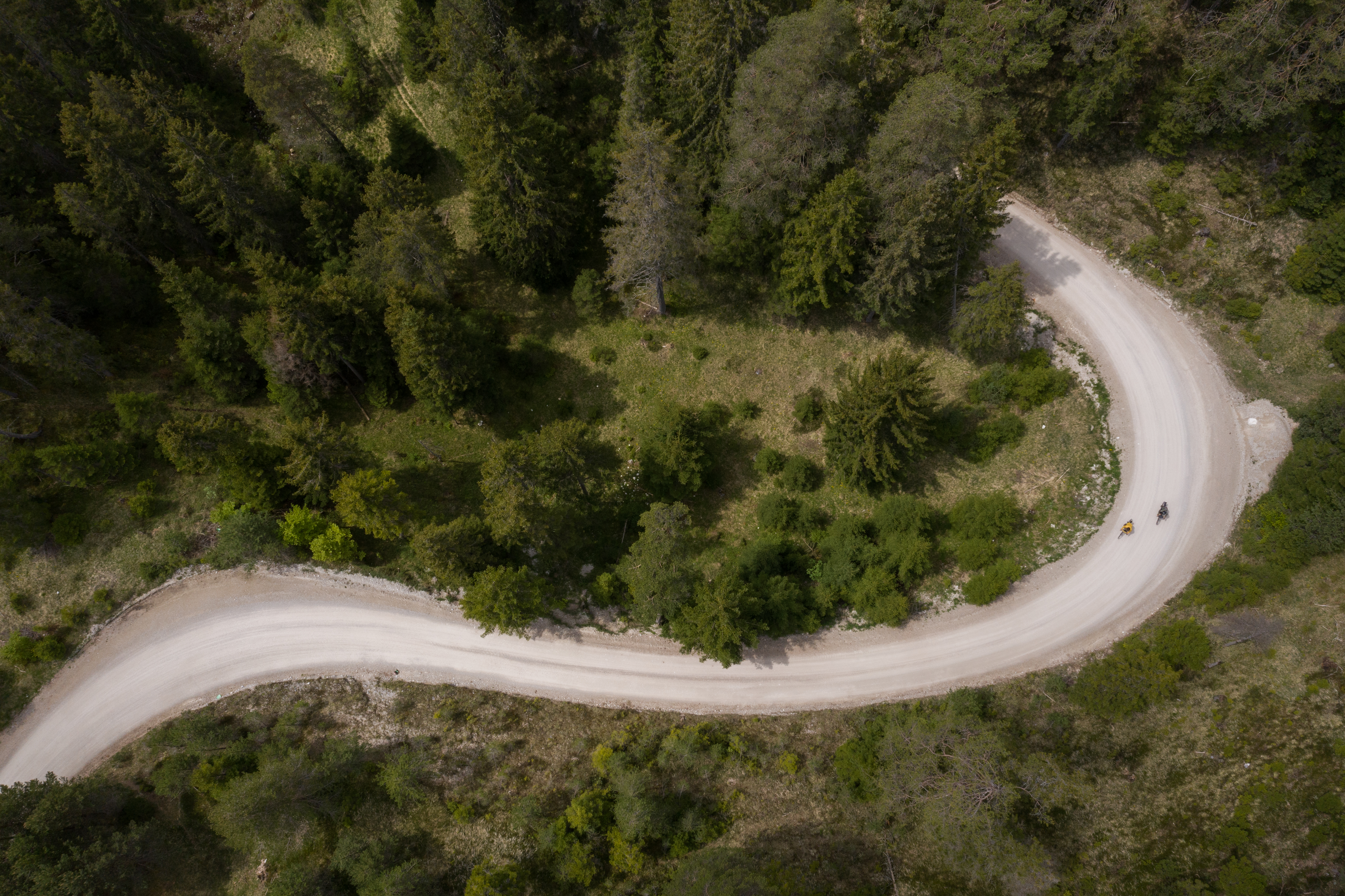 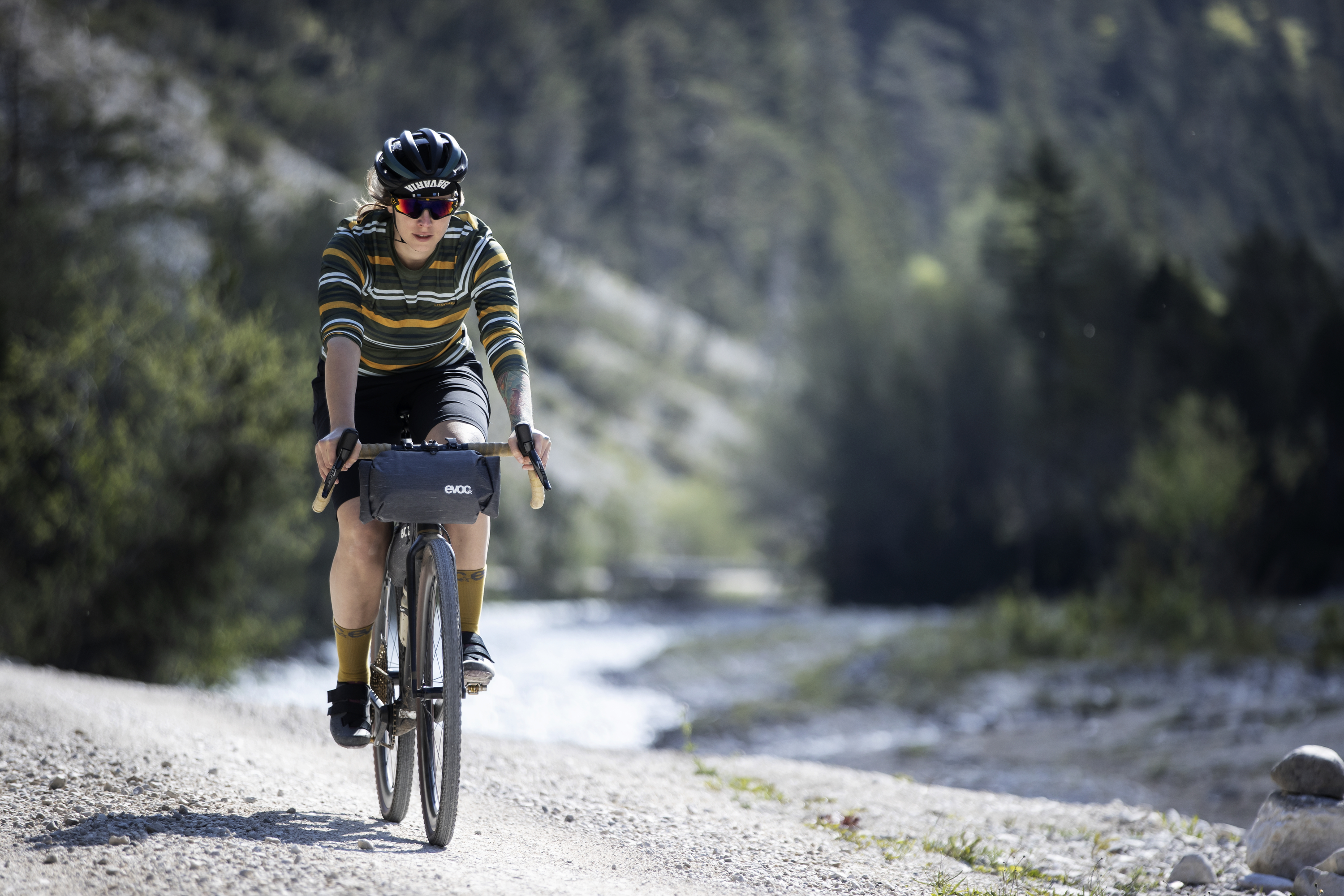 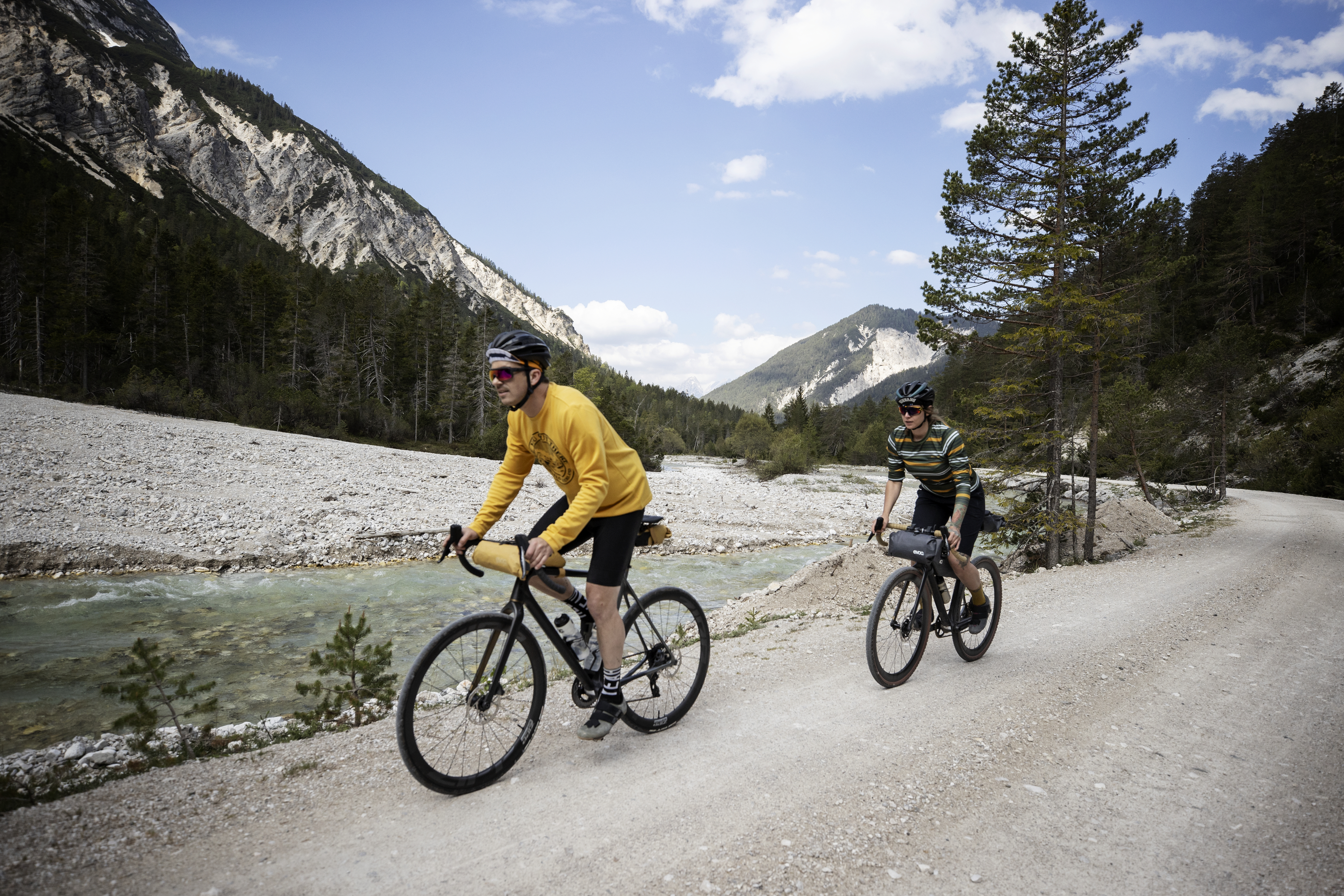 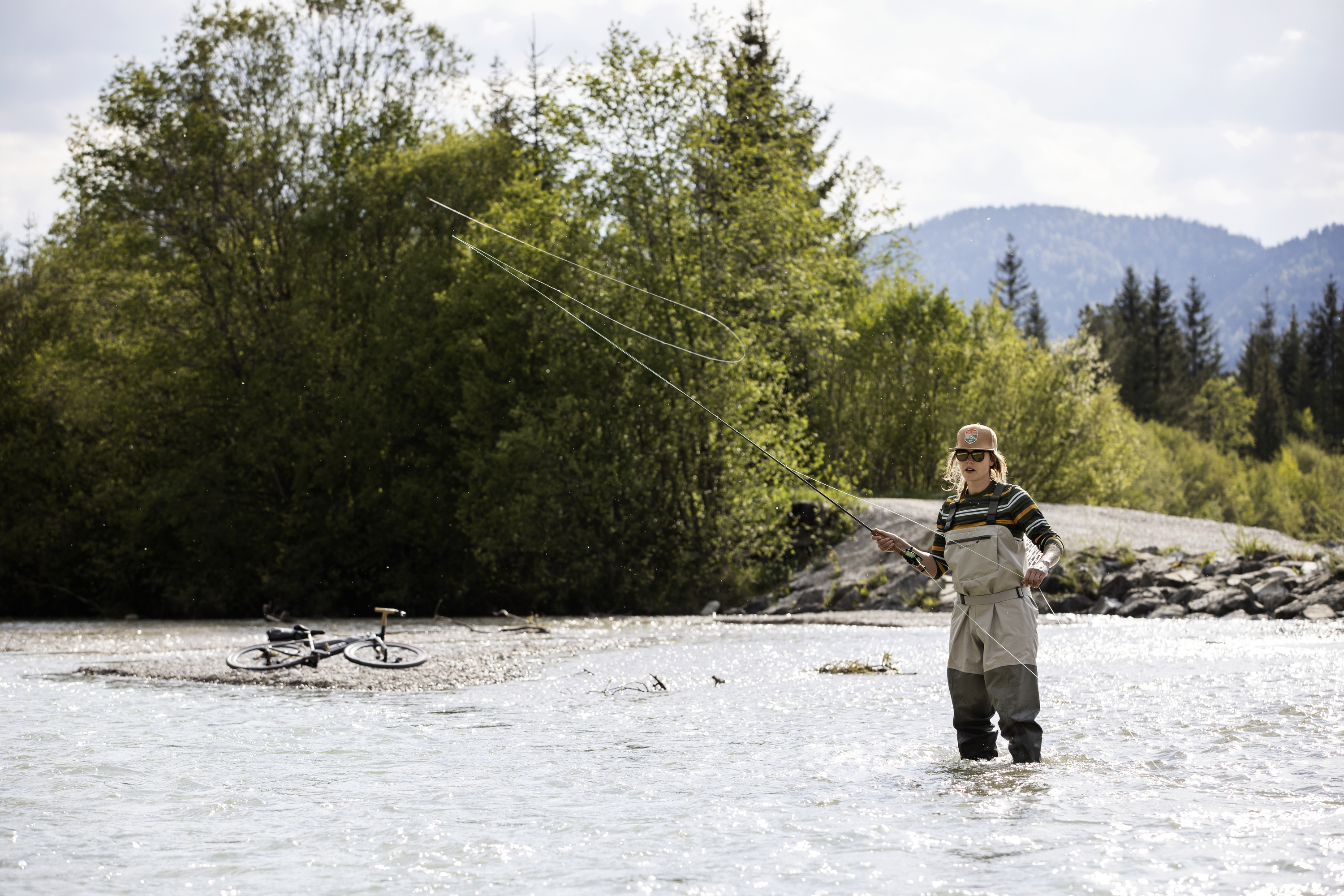 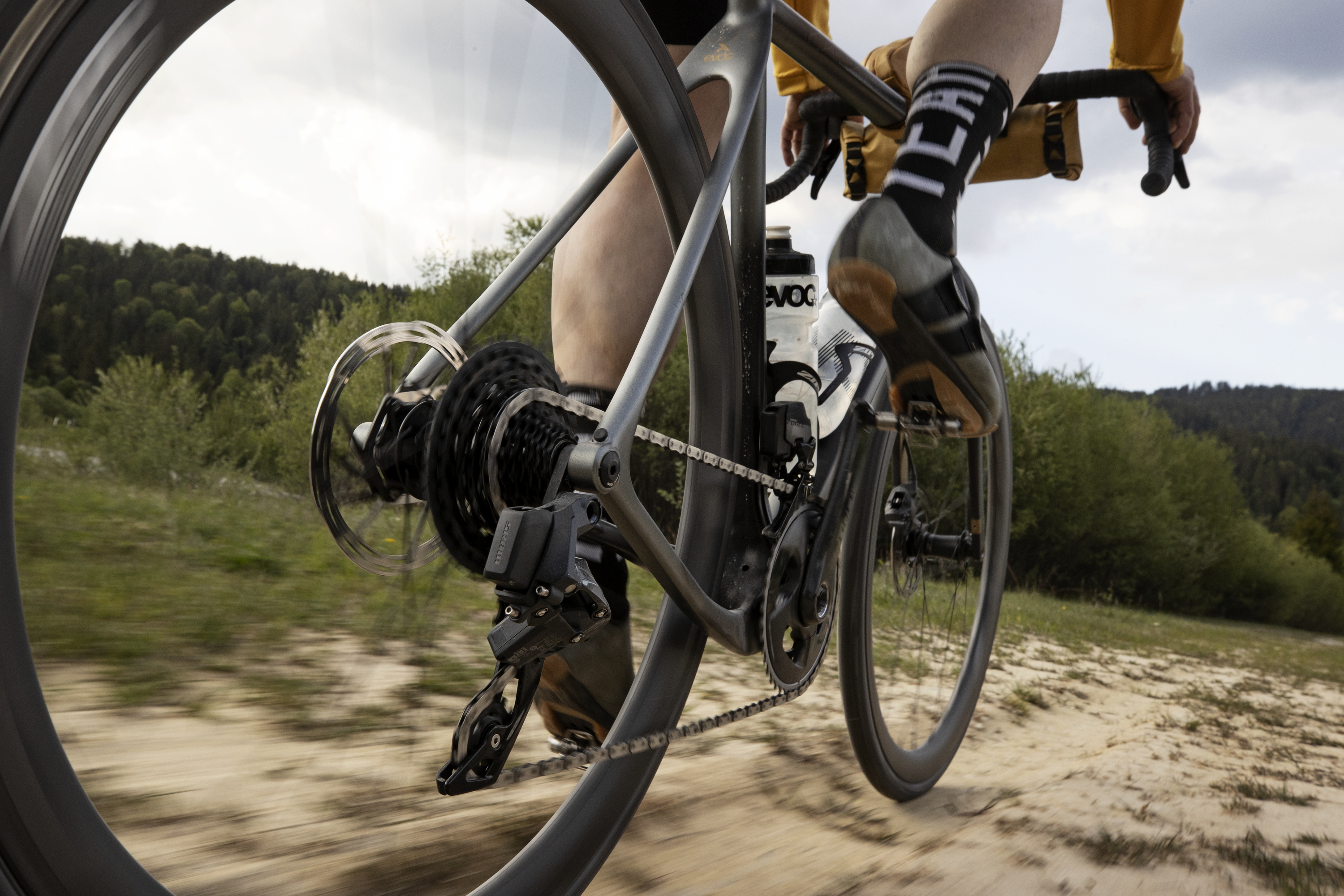 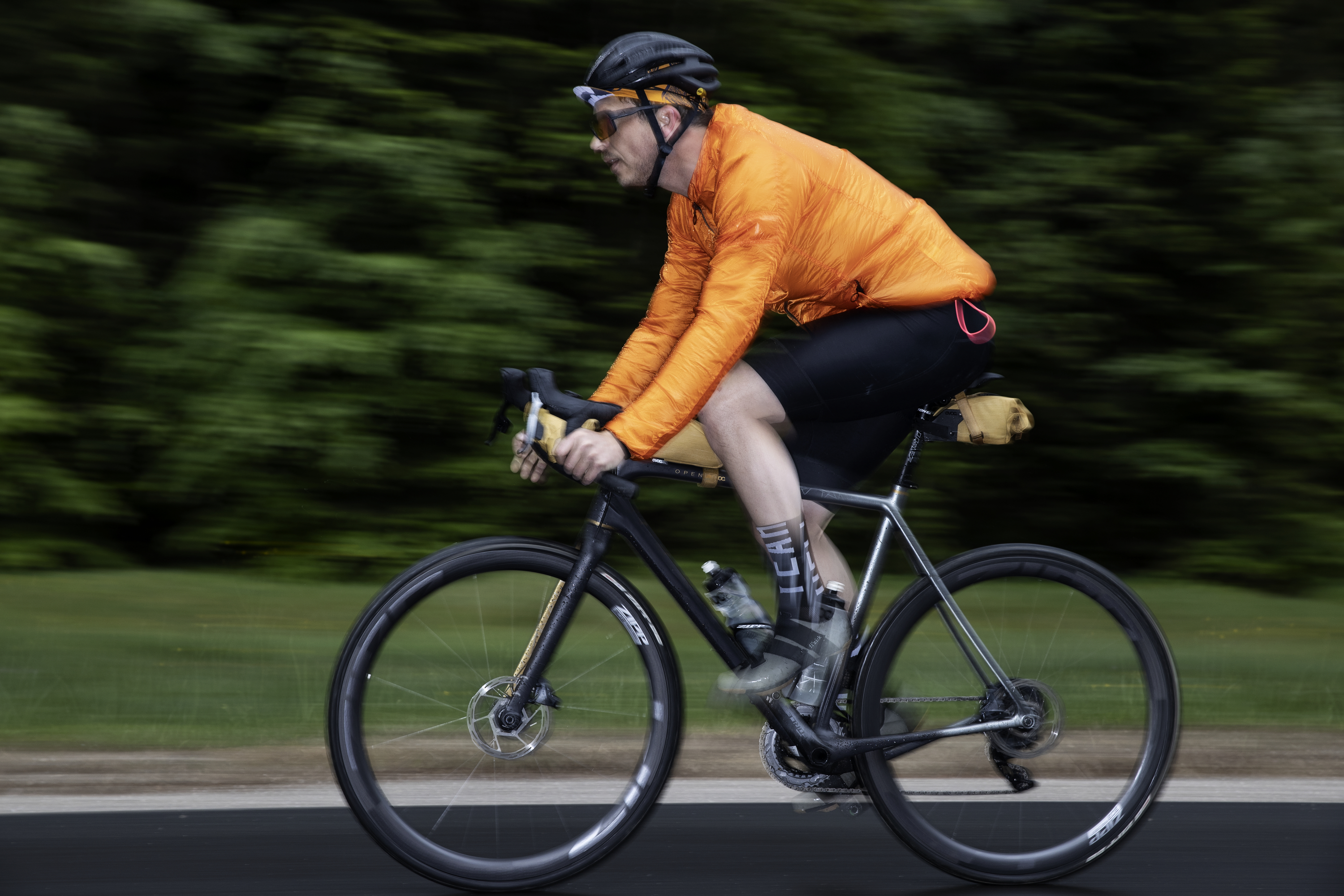 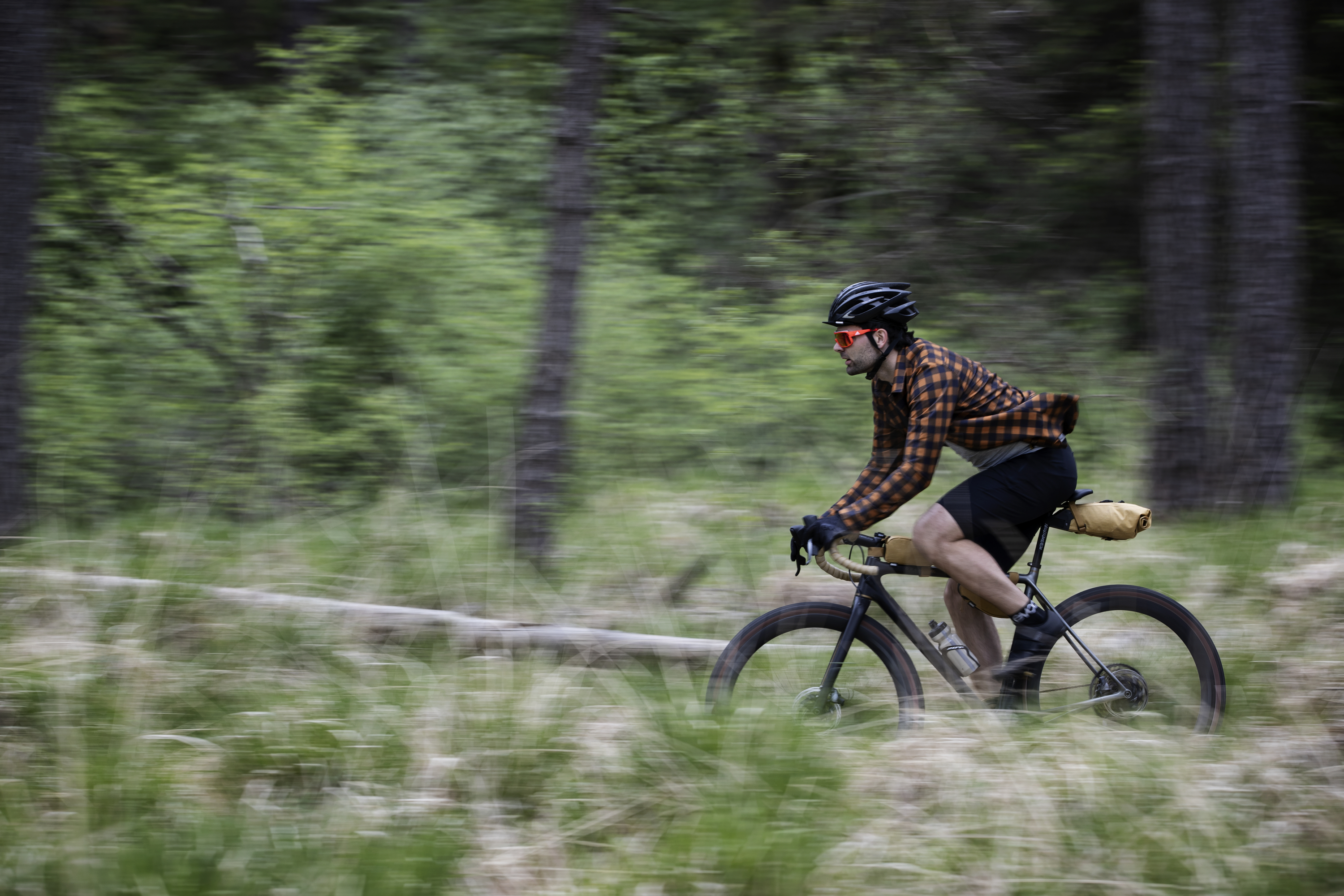 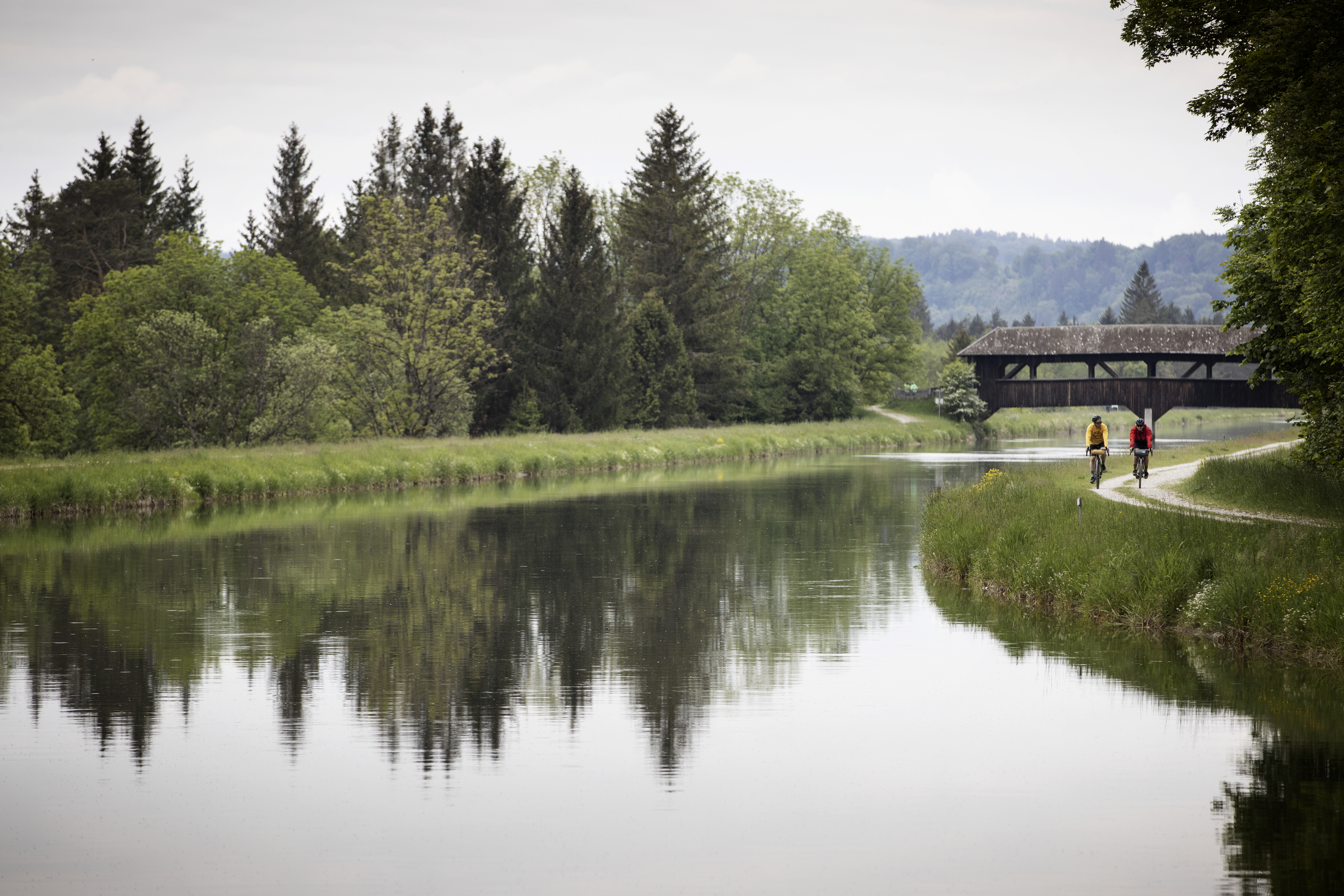 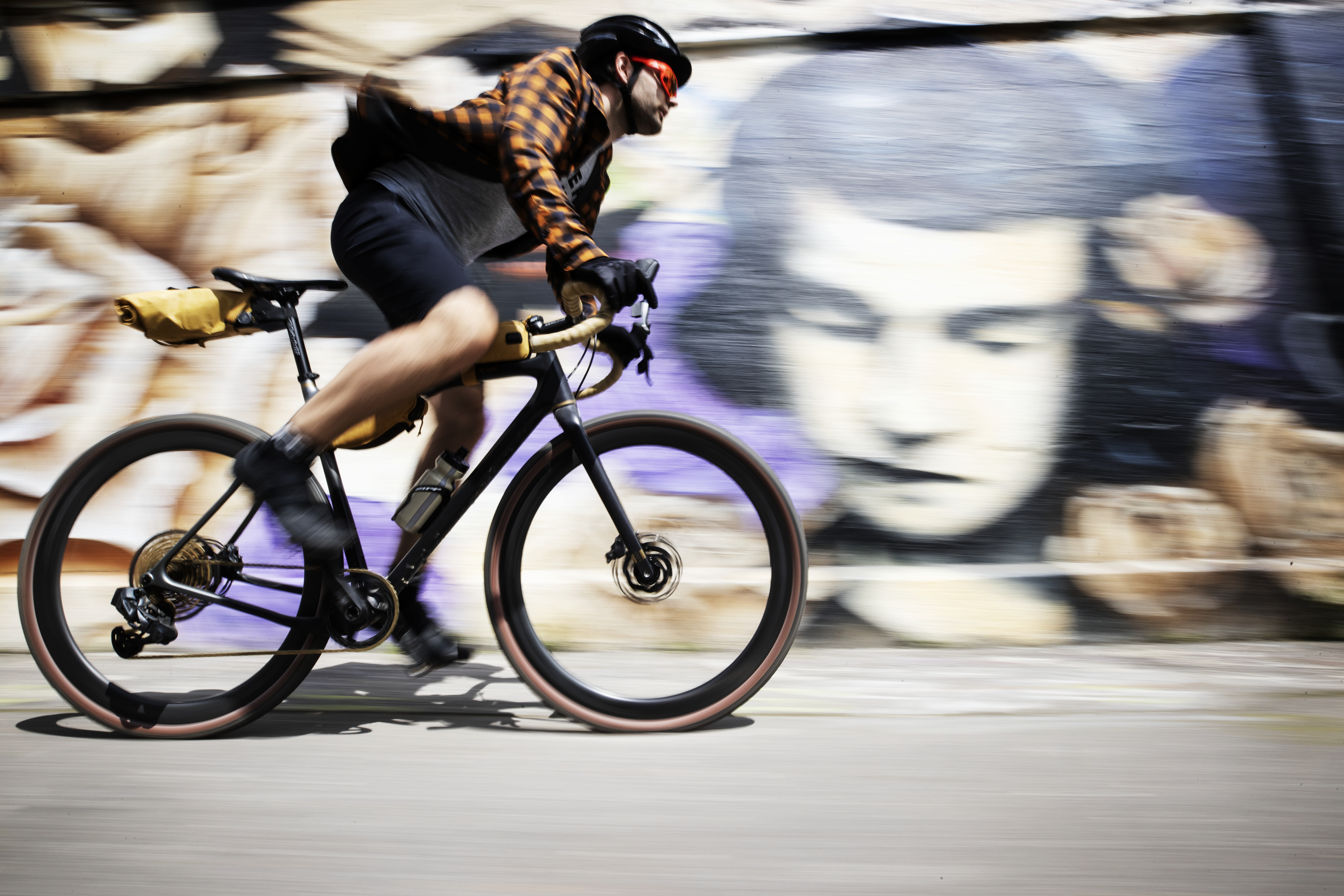